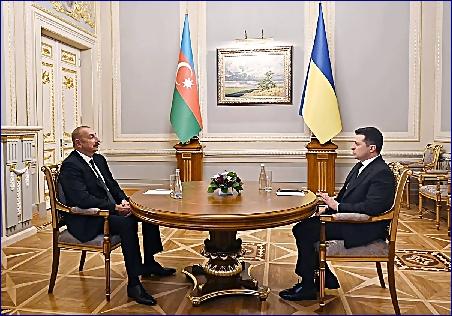 Allies and partners: Can the West and Ukraine jointly form a "community of values"?

Photo: Volodymyr Zelensky and Ilham Aliyev of Azerbaidjan
There are not many such indiscriminate attacks on human rights defenders as we have witnessed in recent days by the Ukrainian authorities. Probably the closest thing to this was seven years ago, when Amnesty International documented the ethnic cleansing perpetrated by the idol of the Western left, the Kurdish militias, against Arabs and Turkmens in Syria.

YPG/PKK activists then even boasted on social media using  stories of how intimidating the authors of the research with physical violence had worked.

Of course, there are vast differences between the rebranded offshoot of the PKK terrorist organisation and the internationally recognised Ukrainian state. Even the very nature of the 'controversial' facts found here are markedly different. In the case of Ukraine today, it is not appropriate to talk emotionally about 'war crimes', even though international law and the Ukrainian army's own field regulations have been violated.

But there is also a difference in the intended position of the two entities vis-à-vis us. Although the PKK/YPG has tried to outwardly present itself as a "progressive leftist organ" and thus become permanently acceptable to the West, the plans of the US high command have, after all, always considered it more of a one-time "partner force" than a true ally. In such a case, then, significant differences in values would not necessarily matter - if it were not for the fact that US support for the PKK/YPG inadvertently triggered a process in which the country with NATO's second largest army, Turkey, became closer to Russia at a critical moment due to the abandonment by its allies.

But Ukraine is not to be any mere "partner" entity henceforth. Prospectively, it would like to join the EU - and, if it can one day, NATO. This is not just a matter of purely pragmatic interests on both sides. At stake is also the future of the Western value communities that both of these international organisations aspire to be. Where common values are really lacking - most obviously at the moment in the case of Orban's Hungary, in the case of "European candidate" Serbia, but there is also a big problem with Poland - relations are not working very well. There may continue to be a simple old-fashioned military alliance, such as the one that still formally links us to alienated Turkey, or a value-free common market, but deeper integration also requires deeper consensus.

As in the case of the Kurdish militias we were told years ago that they  were 'fighting for us', this time too comes the indiscriminate pressure to significantly relax our value claims after learning unpleasant facts about our security partners, and to excuse non-compliance with basic international norms by an 'emergency'.

Supporting the PKK/YPG was, of course, a misguided Western move from the outset - and the still unfinished fight against the 'Islamic State' should probably have been better left to existing local Middle Eastern actors, who would have eventually handled it similarly badly as Western intervention would have done by proxy. By contrast, we do not have the same choice in the case of Russian expansionism in Europe. One cannot say "Let Ukraine fight it out on its own" and think that such a catastrophe would not affect other European countries.

But on the third hand, even a Ukrainian victory, if we can now see its possible outlines, would not completely guarantee that the chapter of Russian expansionism will be closed, at least for the immediate future. Putin may also try to quickly swallow the fifth of Ukraine he now holds and in just six months send newly recruited troops to occupy a completely different European territory. At least a piece of it. Not everywhere is well prepared for him.

The narrative that they are fighting for Tbilisi, Chisinau or Vilnius at Kherson may end up being misleading. It would undoubtedly be symbolically valid if it were about defending shared values. But if it is not, and if even the totally uncontroversial demand for compliance with the Geneva Conventions is causing a stormy allergic reaction, the only thing that matters now is the fact that Ukraine is now tying up Russian armed forces.

The attitude towards the "unpleasant" findings of human rights organisations is the proverbial canary in the coal mine when it comes to the value orientation of governments. A hostile or strongly hostile, implacable response to "unpleasant" facts indicates that some sort of "value community" with those so responding cannot be formed. The European Union is already creaking internally enough with anti-liberal Poland and Hungary inside. To add another large and important country where the functioning of democracy is not looking good, where there are  obvious authoritarian tendencies and where the critics of the government are silenced, could ultimately prove fatal to the EU.

Ukraine is undoubtedly fighting for its life under Russian attack. Part of this struggle is to defend its government and the nationalist project it represents. It is not at all in our interest for this project to fail. However, in what sense we can say that 'in Ukraine, the fight is also for us' is now in serious doubt.

Very much like the Kurdish fighters, who have been financed for years by the drug trade, we should probably stop telling ourselves that the struggle we are pursuing necessarily involves fighting for what is dear to us. Individually, many Ukrainians certainly feel this way and deserve our immense respect and support. Unfortunately, this is not true in the aggregate. The cult of the un-criticisable army and the un-criticisable President represent infinitely more in this country than some 'abstract' protection of civilians under international law. We do not see that in the real West.

At various stages of the ongoing war, the individuals who have published "inconvenient" information have been attacked by furious Ukrainians as   'Russian agents'. This label has been   applied to such clearly pro-Ukrainian figures as Kevin Rothrock, editor-in-chief of the English version of the Meduza news server, Julian Roepcke, editor of the Bild, and even Keir Giles, director of the British Conflict Studies Research Centre. And the list is getting longer and longer every day.

Still this morning this perfectly decent story is causing @mjluxmoore to be vilified as a Russian propagandist and colonialist. Mainly it seems because he was made to look like one by a misguided @WSJ tweet - https://t.co/ffxVvbXIdI

There’s nothing but contempt for them among Ukrainians. No one expects anything from them anymore.

Already during the Ukrainian counterattack in Donbas in the summer of 2014, Western commentators criticized the Ukrainian military's practices, which were not all that different from Russia's at the time. Mass artillery fire on entire settlements was no exception.

However, strangely, no one at the time shouted anything about "aiding the Russians" and "Putin's agents", but instead the authorities simply made sure that such practices ended. There was political will. It worked. Perhaps part of the reason was that a different person sat in the presidential chair than today.

But the last few days a foreign-looking tissue of paranoid, self-righteous Ukrainian petulance towards the entire outside world has grown in the petri dish of war. At least under the current government, it looks much more like a "partnership" than a proper alliance with the West.
0
Vytisknout
Britské listy plně závisejí na finančních příspěvcích čtenářů. Prosíme, přispějte. ➥
2543 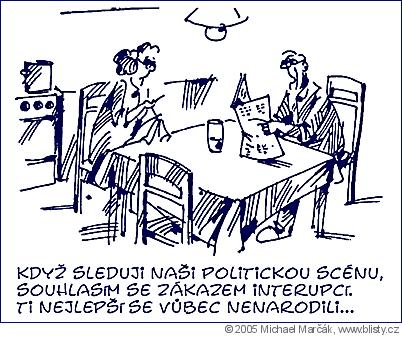