Karel Kryl' s views on post-communism in the Czech Republic

Karel Kryl (1944-1994) is a revered Czech folk bard. He started singing and writing his stark ballads, creating nightmare visions of totalitarian landscapes, in the mid 1960s. After the 1968 Soviet invasion into Czechoslovakia, he shot to fame with his song "My little brother, close the gate", which kind of predicted the invasion. Soon after the invasion, he defected to Germany and was given a job as a diskjockey in the Czechoslovak section of the US funded Radio Free Europe in Munich, where, amongst other things, he broadcast programmes of his songs. The transmissions were very difficult to listen to because the communist regime jammed the broadcasts heavily. Still, they made it through somehow because after the fall of communism, Kryl was hailed as a national hero, siging to hundreds of thousands. It has to be said that he left Radio Free Europe in anger, protesting against censorship.

Having experienced life in a Western democracy for almost twenty years, Kryl assumed a very critical attitude towards the new post-communist regime in Czechoslovakia. He died prematurely at the age of 49. One of his songs from the period of post-communism, "Democracy" has shot to fame recently. It has been viewed by almost a million people on YouTube. The text of the song has now been translated into English by Václav Pinkava, one of the sons of the well known Czech post-modernist prose writer Václav Pinkava senior who wrote under the pen name of Jan Křesadlo (John Tinderbox 1926-1995) and lived and worked in England for many years. Here is the English translation of Kryl's famous song:

Democracy is flourishing, with the odd facial pimple:
Those who were thieving all those years now made it doubly simple,
[:Those who made lives a misery, don't take, just give us - notice,
And those who sang about the truth are being branded traitors.:] :]

Democracy is doing well, pragmatically, without us,
We sip our beer with froth and gripes, we've always grumbled loudest,
[:The priest is eager for his tithes, he's made the sky the limit,
and Forbes takes coins of every size, and feeding him's our remit.:] :]

Democracy now rules with calm, Gott sings with Walda for ya,
At old McDonalds lardless farm our lips are smacking soya,
[: King Václav chums with wideboy scum, like two birds of a feather,
under the ruling party roof, around the trough we'll gather.:] :]

Democracy embraces us, west-east, there's no escaping,
All velvet kindness passed away, and broken teeth are gaping,
[: We have fine brand new harnesses, though hot under the collar
we take our stance on this and that, instead of standing taller. :] :]

Democracy is bearing fruit, of gastric ulceration,
no honesty, no rule of law, and no consideration,
[: An optical illusion then, my private view mistaken,
stomach for heart and jaws for soul, transplanted, places taken.:] 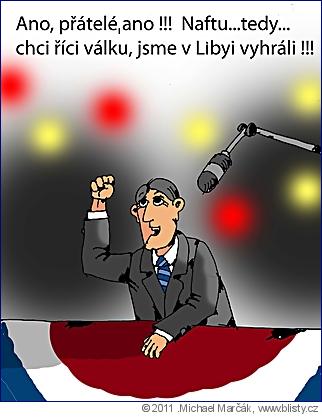