One of the strengths of Česká televize's current documentary output is the use of established filmmakers combined with the blooding in of new talent, leading for a collection of various projects of varying remit. Compared to current BBC projects I would suggest that Čt is doing a far better job and for the precise reason of prioritising documentaries as much as other content on the channels.

A good example of youth coming through can be seen in the Expremiéři project, set to broadcast next year, where FAMU filmmakers create a series looking at the former Prime Ministers of the postcommunist Czech state. Three films were on offer at Jihlava -- Petr Pithart, Vladimír Špidla and Václav Klaus. It is an interesting concept to film a series of half-hour or so films by different directors, and based on the footage that was available, it looks to be relatively successful. Jaroslav Kratochvíl's investigation of Pithart does well in stepping-back from asking questions and gives space for the former premier to offer his insights into the challenges of his cabinet and how he sees the political future. The director takes him to various places which impacted on his leadership, for instance a car manufacturing plant and a mine, and arranges a round-table discussion with former ministers that captures Pithart much more naturally than shoving a camera in his face. The one question that remains is if this technique would have achieved so much with a more controversial figure, for example Klaus or Zeman, and there aren't as many awkward questions as could have been expected. Overall it works in balancing the political legacy of Pithart, his positions, and the man himself, capturing the unique challenges faced at the time of a newly independent Czechoslovakia.

Moving further down the line, and to Social Democrat Špidla, director Martin Kohout chooses to incorporate more television footage, in particular around the problems of the Presidential election and accession to the European Union. In interviews attention is paid to the disputes and differences between Spidla and Zeman, and probably deliberately since Zeman is back in political office. In contrast to the more sympathetic handling of the previous episode, Kohout seems keen to show the negligent practices of Czech politics, and achieves it by the different approach to the topic. The biggest difference, however, is how Petra Nesvačilová chooses to film her documentary on Václav Klaus. This is partly due to Klaus refusing to be filmed for the programme and as such the director needs to come up with a novel twist that won't just paste together old interview footage. Thus, Václav Klaus turns into Nesvačilová's quest to track down the former ODS frontman, putting herself in front of the camera and visiting many locations infamous to his tenure. Three productions which are very different in format to each other, but oddly enough, it seems to work.

Klusák and Remunda are reliable options for creating thought-provoking films in their own unique way, and have done so again in Život a smrt v Tanvaldu. This has come at a time where there are increasing debates on the levels of racism in the Czech Republic, and the killing of a young Roma man at the New Year serves as stark reminder to this. By now, most viewers of the pair's work notice that they are most effective when dealing with contrasts and hypocrisy, and it is no different here in the comparison between what should notionally be a national scandal and the indifference of many townspeople to the killing, in an area noted for factory closures and high unemployment. Despite the nature of the film, Klusák and Remunda have no qualms about placing themselves in the film, and this time it serves the purpose of introducing an ethical aspect -- should the filmmakers be focusing their camera on the young boy who has lost his father? How should the filming be treating the victim's family? An argument between the two directors breaks out, and this is illuminating not just in the context of Život a smrt v Tanvaldu, but also in how the pair approach the art of documentary making itself. Rather than the film being one-dimensional and concentrating only on the tragedy, it becomes a discussion point on tolerance and assimilation, and leads to the questioning of our own prejudices and how we view Roma people in our society.

An interesting new contribution to be broadcast on Czech Television on 11th November is Pod dlažbou je pláž, Radim Špaček's new work on the importance of public service broadcasting. Perhaps a slightly insular topic considering Česká televize's position as one, but nevertheless a worthwhile reminder as to what such a service can provide. The film is a series of expert interviews of those involved in public broadcasting, including former BBC Director General Greg Dyke and even Britské listy's very own Jan Čulík. I felt it was well put together, and will perhaps withhold all judgement until I see it a second time, but it should be said that at times Pod dlažbou je pláž holds up the BBC as something more than what it actually is. It is fine to see the BBC as a model of which inspiration can be taken from, however to portray the BBC as infallible (which maybe, at least in Dyke's words, it comes close to) would be incorrect. This comes, mainly, from the misconception that the BBC is objective, and importantly that people in Britain believe the BBC to be so. Not true -- increasingly, through the corporation's handling of the Gaza crisis and Syria, to name but a few examples, there have been accusations from many sections of society that the BBC has been biased towards a particular viewpoint. This has also occurred in domestic politics -- if we are to look at the invites to the flagship Question Time programme, we see that UKIP leader Nigel Farage has been invited more than any other politician, and despite UKIP being without any representation in Scotland and less than five in Wales and Northern Ireland combined. In many respects they are nothing more than a minor, racist, `little England' party, and the increasing resentment by licence-fee payers towards how the BBC routinely talk them up is noticeable. Viewers in Scotland have noted that the BBC's operations in Scotland have arguably tried to shut out pro-independence arguments for being heard, while at the same time increasing their programme output in areas that are dealt with supposedly shared `British' history and values.

I also would have appreciated a look into the political nature of the BBC, rather than just a gloss over. The role of Thatcherism in the 1980s led to claims of neutrality being shot, with the appointment of Governors an attempt to bring the broadcaster closer to the Government line. Political interference with the public broadcaster undoubtedly impacts on quality, role and remit of programming -- something which should be engaged with directly in a documentary highlighting how important these broadcasters are. There will no doubt be a debate when the programme airs on Česká televize amongst those with an interest in the media, and this would be to the credit of the team involved in Pod dlažbou je pláž, as documentaries should indeed be involved in generating discussion over certain contentious points. I for one look forward to it.

In terms of light relief with a serious message, Ivo Bystřičan's Mých posledních 150 000 cigaret is another ČT supported project that is now touring the Czech Republic in cinemas. Originally conceived as a fun film for his friends, Bystřičan takes us on his personal journey of quitting smoking, while at the same time posing serious questions about the Czech tobacco market and the effect it has on both the nation's health and finances: while wearing a full-body cigarette costume. It's a cross between Thank you for Smoking and Supersize Me, and where the director could be accused of simply mimicking this particular style, the content is no worse off for doing so. Bystřičan is a relatable and personable character, who enjoys making politicians squirm as much as we do watching it. This is certainly not a high-end `artistic' documentary, but it doesn't pretend to be either, and goes to show how versatile Bystřičan can be in his film making.

Based on the above, there is certainly much to look forward to in the upcoming schedule of Česká televize and the projects it is supporting. The sense I get from both the dedicated venue at Jihlava and the quality of work on offer is that it is taking a serious interest in producing documentary films and aiming to introduce them to a wide audience. This is certainly to be welcomed, as is the diversity of output coming out, from both new and established directors; and puts the broadcaster in a favourable position for developing more documentaries in the future. 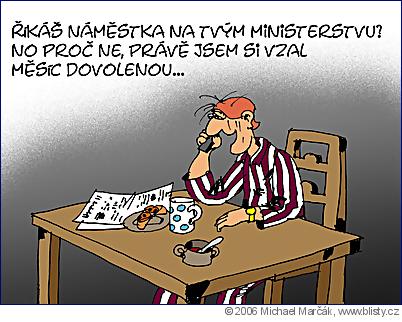