Czech President Zeman: The refugees are well-fed and have iPhones, they are probably jihadists

"90 per cent of the refugees are young, well-fed men without families, women or children and with iPhones in their pockets. They mostly complain that their money and their technology has been confiscated. That is why there may be jihadists among them," said Czech President Miloš Zeman on Thursday in the Czech town of Vyšní Lhoty where the Czech Republic illegally imprisons hundreds of refugees.

Zeman did not visit the refugee detention centre. He only spoke to the inhabitants of the Czech town. He said: "I did not come here to meet the refugees. I only meet the citizens of the Czech Republic and I meet foreign guests only when I have invited them, which has not happened in this case. If the mayor of this town was the head of the European Union, it would be much better than the current situation. Because what kind of unit is the EU since it is unable to protect its own borders. If the EU cannot do this, we should do it ourselves."

You know, Mr President, I have an iPhone. Does that make me a jihadist? https://t.co/PXGDkxbFaj— Andrew Stroehlein (@astroehle... 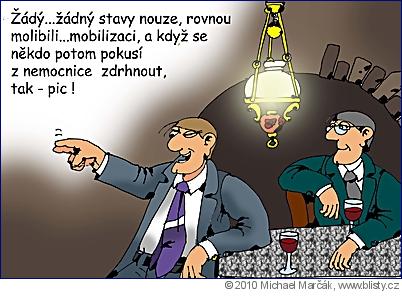