More than forty refugees which the Czech authorities hold in the refugee prison in Drahonice, Czech Republic, have gone on hunger strike. They complain that they are being held as though they were prisoners  and that are afraid they might be deported back to their countries of origin. This information has been provided to the Prague-based Lidové noviny newspaper by the protestant minister Mikuláš Vymětal, who works with the refugees.

Vymětal reports that Iraqi refugees and a Somali are on hunger strike in Drahonice. The Drahonice refugee prison holds 144 individuals.

Minister Vymětal gave the Czech News Agency a statement, signed by the initials of two of the refugees, which says that they are running away from destroyed countries. According to Vymětal, 44 people are on hunger strike in Drahonice.

One of the employees of the Drahonice refugee prison confirmed the fact that the refugees are on hunger strike to Czech television.

The refugees complain that they are being held for far too long. "In most cases, we were willing to accept our detention lasting for 90 days, but we cannot stand further incarceration. We are trying to escape war, prison and violence and we have now found ourselves in a new war and in a new priosn. Each of us has lost a relative or a close person in our native countries. By imprisoning us, you are treating us as though we were monsters," say the Drahonice refugees.

Vymětal says that some refugees have been told it has been decided they will be deported back to their home countries. This concerns mostly people from Iraq. "We have been running away from death in our country. We will not go back to death to our home country. We might just as well die here," say the refugees. 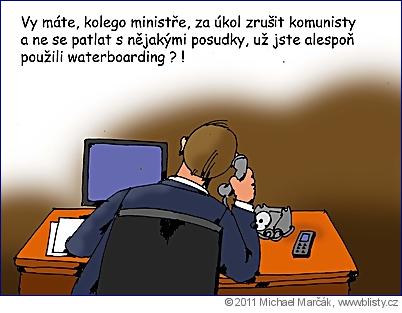