"I cannot sack the islamophobe Konvička," says his dean from the University of South Bohemia

The islamophobe Martin Konvička, who teaches at the University of South Bohemia at České Budějovice, is free to stage mock Islamic state attacks in Czech cities without being afraid that he would be sacked from his university position. František Vácha, his Dean at the University of South Bohemia, explains that Czech labour law makes it impossible for him to get rid of Konvička. Czech labour law clearly defines all the reasons why an employee can be sacked and these do not include political activity of any kind of even political extremism. Konvička is highly regarded as an expert in the field of entomology. Dean Vácha has been contacted by a number of members of the public who demand that Konvička should be fired.

The University of South Bohemia has not sacked Konvička even when he was charged with the crime of hate speech for threatening to gas muslims. Mr Vácha said that he will wait for a court decision in this matter.

Martin Konvička will stand as a candidate for a new extreme right wing Czech political party "An Alternative for the Czech Republic" in the local authorities elections in the autumn. 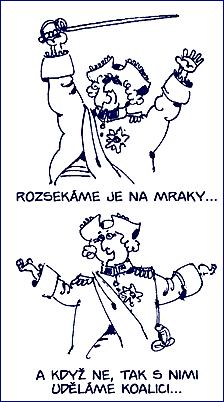