Practical manual for dictators in the 21st century

Totalitarianism which has learned its lesson

A religious interpretation of the world and later Marx's dialectic both  assume that somehow humanity is heading for a better tomorrow. Either it is the kingdom of heaven after death, or longer life. Incidentally,  Marxism is noticeably more acceptable about this. Political developments in recent years, at least from the perspective of a Central European, appear to be good empirical material for a  groundbreaking study which finally disproves this myth. Heavily inspired by the genius of contemporary totalitarian regimes such as China and Russia, Central Europeans are building a somewhat different kind of paradise: it will be what all average Czechs, Poles, Slovaks or Hungarians love. It will bypass  anything which they do not want. Perhaps they will ignore most human rights. Indeed, as demonstrated by the great teacher Miloš, it is necessary for the concept of human rights to be reassessed. The following is a practical guide for trained dictators of the 21st century.

Contemporary political systems of the West now stand on the edge  of what can still be considered democracy. It is hard to say what is the actual political system in Poland or Hungary where populists have come to power and hold a majority while doing so. It is hard to say how far the Czech Republic and Slovakia are from this strange frontier with their, more or less openly or covertly, active policies which are based on xenophobia, isolationism and the so called defensive nationalism.

A Czech version of this article is in

There exist some fairly simple principles which can be quite easily applied to these so-called democracies while  democracy is discreetly dismantled. Their genius lies in the fact that they do not hide  anything. They are visible, present and frequently unreflected by the crowd. Often  they are  warmly welcomed by the crowd. The fact that you can point to them doesn’t diminish their strength. Large political concepts of this type, as can be seen in China or Russia, can serve as great inspiration.

So what is it necessary to do if you want to fully control people in the 21st century, yet  give the impression that you only follow the will of the people and, that you are "forging democracy":

To ensure a relatively bearable standard of living: Definite imperative. People are not willing to take risks if they have what is comfortable. However there is a limit when people in desperation like to lynch a governmental representative or two.

Link market rule with hegemony: Absolutely essential. This is not a novelty. It  is  necessary to produce a workable balance in so-called democratic societies, so that  people still feel that they have a choice and  there still exists some possibility to do some business. This is  essential  because when you clamp down a lot,  people's  natural entrepreneurial spirit will transform into various subversive tendencies.

Sensibly deal with the economic elites: It is necessary to prevent needless conflicts of power. There are countries - such as Russia - where it is from time to time necessary to calm down an occasional restless oligarch. A few years in prison has incredibly strong therapeutic effects. When that doesn’t work, there are other possible resources to paralyse him. In China even the judiciary can be used for this. These are wonderful instruments but you have to have the reins fully in hand. What is suitable for Central Europe is an appropriately friendly agreement and mutual favours that maintain societal homeostasis and peace for work.

Democracy is the government of the mob: This really simplifies the whole process and eliminates doubts. Give the crowd a feeling that it is endowed with the highest level of knowledge and it is a flag bearer of democracy. This produces fuel with high calorific value.

Do not suppress the media. It is enough to have a popular majority. Be careful. It does not create a good impression if you overdo your eagerness to control public  discourse. You must retain the impression of a clash of different opinions. It is enough if a certain opinion is sufficiently highlighted so that people come to the conclusion that its prevalence  is a manifestation of the "democratic will" (i.e. will of the crowd). You can, like in Poland, create an authoritarian state media complex. It is certainly possible to combine this with some freedom of expression.    Just be really careful.

Do not suppress dissent, just reduce it below the critical level: This is linked with the rule of reasonable pluralism of the media. It raises doubts if you arrest people for their opinions, while they do not threaten you significantly. Until then, it is quite pleasant to have dissent and to keep it in a state of powerlessness through the democratic majority and  suitably chosen “social drugs".

Restrict the Civic Sector to a minimum: The so-called civic, nonprofit sector generates most of the problems you will  encounter during your project. It is good to give these activities a useful but at the same time harmless meaning.  Generally, it is very useful to promote  all the harmless pastimes of contemporary society. Sport is ideal. The area of ​​digital games is still completely undiscovered. Anyway why don’t more people play in the digital sandbox? A hot tip for the near future is virtual reality. There are unheard of possibilities in this area.

Having an helpless enemy: This is a multifunction tool, again not new. You can use it offensively and gain popularity and political support. Relatively defenceless minorities are ideal for this, in every society you can always find a few. You just need a sensitive hand when selecting them.

Create the impression that this kind of democracy is much better than the original version. Since you need to retain a certain openness of public space it is necessary to know that occasionally  somebody will say that this is not what democracy looks like and will slyly point the finger at some examples from abroad. In that case, you need to refer to the democratic will of the crowd. Thus you will be able to assure the public that such individuals  are wrong. If you exercise sufficient control over the state media you will always be right.

Restrict education as much as possible, reducing it to the instrumental level. In other words, produce "more technicians": Nothing spoils the atmosphere of the solidarity of the crowd as much as too large a percentage of people educated in the social sciences. These are complainers who will raise questions  and tinker with details. It is not good to deny people access to education, that was done under the old style of totalitarianism. It is much better to tailor education so as to avoid unnecessary infectious thoughts. The aim of education should be able to manufacture something and show people their place.

Allow travel: perforce. People actually do not need freedom of speech if you give them the illusion that they have it (see the above  instructions regarding the media). People do not even need  freedom of assembly, if they live under the  illusion that they have it. People should be allowed to gather together in front of the large screens during  the World  Ice Hockey Championships, and they should also be allowed to organise  occasional strikes. Trade unionism should also be allowed. But mainly, let people travel. The vast majority of them will go to the same place most of their productive lives. But let economic elites travel anywhere, it's part of their privileges, and they appreciate it.

(Translated into English by Blair Biggar) 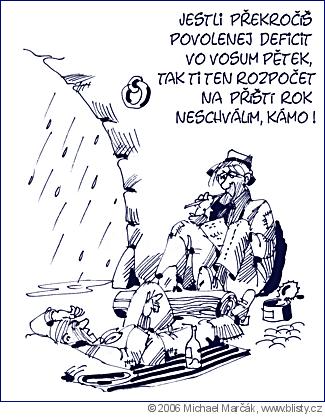