čas čtení 1 minuta
"It would be ideal if the Czech Republic [it has 10,5 million inhabitants] could defend itself on its own. Austria and Switzerland are not members of NATO, either," said Tomio Okamura, head of the ultra-right wing Czech SPD party, which now has 22 seats in the 200-seat Czech Parliament. Okamura is now Deputy Head of the Czech Parliament.
"We do not want any foreign armies on the territory of the Czech Republic. We want the Czech Republic to be able to defend itself on its own," said Okamura. SPD's MP Radek Koten, who is well known for disseminating fake news from questionable pro-Russian servers, has now been appointed Chair of the Security Committee of the Czech Parliament.
For the moment, the Czech Republic must stay within NATO, because the country "is as yet unable to defend itself." But Okamura's SPD will "strengthen the Czech army. Its purpose will be to defend the Czech Republic, not to defend the interests of foreign powers thousands of miles away," said Okamura.
The SPD Party will demand the introduction of non-compulsory eight week military training for everyone, which will make it possible for people who have undergone it to be registered to carry weapons. Those citizens who will not want to undertake the military training will have to write a statement why they refuse to participate in the defense of the Czech Republic.
"I support the idea of collecting signatures for a referendum demanding that the Czech Republic should leave NATO. This is a legitimate demand and it is necessary to start a public debate about this," said Okamura, adding that 100 000 signatures would be enough to trigger such a referendum.
Okamura and his deputy Radim Fiala also want the Czech Republic to leave the European Union.
Okamura will not support a minority government run by the oligarch Andrej Babiš.  Instead, Okamura wants to form a coalition government with Babiš. Babiš has been so far refusing to do this.
Tomio Okamura's views (English subtitles):
Source in Czech: HERE
Česká politická scéna
0
Vytisknout
Britské listy plně závisejí na finančních příspěvcích čtenářů. Prosíme, přispějte. ➥
6258 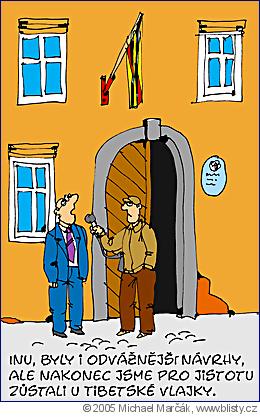