Deputy Head of the Czech Olympic Committee: Women should avoid top sports, their role is to be mothers

“Women in principle do not want to win. They always want to achieve  only a honourable draw. Most women’s sports trainers will tell you that women prefer to train only rather than to actually participate in competitive games for real.” These are the views of Zdeněk Haník, the Deputy Head of the Czech Olympic Committee, as he expressed them recently in an article he wrote for a Czech newsmagazine.

The article was the reason why Haník has now been interviewed by the Czech videochannel DVTV. In the interview, conducted by Martin Veselovský, Zdeněk Haník elaborated:

“If women want to do top sports, they must subordinate themselves to the dictate of success. It seems that women find it difficult to accept this. Women are heroes for me primarily as mothers,  who take their children to school, they do not go to sleep when their children are ill, they wash socks and iron shirts for us men, so that we could be impressive, and they know how to give us a hug when bad times come. They quietly stand behind us when we deal with ‘important things’ at our desks and like a breeze, they address us with the question ‘I have made fresh herbal tea, do you want some as well?’ I really admire a woman if she behaves like this. It is more important for me if a woman behaves like this than when she strives to be a top sports person.”

“I fully respect all top sports women who have made successful sporting careers. It was their decision. However, from the point of view of the principle of life and from the point of view of what the male role and the female role is in life, I pay more homage to a different type of womanhood than to a top sports woman and I think as Deputy Head of the Czech Olympic Committee I am fully entitled to do hold such a view. Because sport is not just medals.”

“I know stories of a number of women who have won sporting medals but then they have suffered problems in their later lives and in their relationships. Top sports men experience such problems less often. Because women follow men and not the other way about.”

“Psychologists have told me the stories of some top sports women and what happened to them in the second halves of their lives. It is easer for top sportsmen because they do not have the worries of a parent.”

“I support the traditional model in which a woman is primarily a mother.”

Interviewer: “You do not wash your own socks?”

Interviewer: “Do you know how to iron a shirt?” 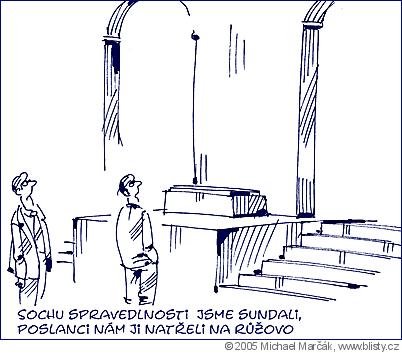