A Czech holidaymaker has published a video of "staged drowning of refugees", filmed in Crete. It was a lie

Several Czech websites have recently shared a video made by Marek Chrastina, a Czech holidaymaker in Crete. Mr Chrastina argued that his video recorded the filming of "pretend-drowning refugees", an instance of fake news, made and disseminated by the establishment media to make the European public feel sorry for the immigrants who try to cross the Mediterranean.  In fact what the Czech tourist recorded was the filming of a scene for a historical film dealing with the Turkish-Greek war of the 1920s.

The Czech's  video, recorded on a beach in Crete, went viral on the web last month. A group of women in scarves walk into the water, carrying bundles containing things. They make their way towards some men who pretend to be drowning in the water. Then the video pans to show a cameraman and a film director who are instructing the actors in the sea what to do.


The video was published by the Czech AntiKavárna Facebook page. Mr. Chrastina gives this commentary: "In Crete, in the town of Lerapetra, I have filmed an interesting video. Everyone will surely come to their own conclusions." The author adds that this is "how the media fake the alleged drownings of refugees. This is how we are manipulated by our TV stations."

Mr. Chrastina's video from Crete has been viewed more than 1,2 million people in the Czech Republic, in Poland, in Spain, in France and in the United Kingdom. There is even a version with English subtitles on YouTube. The video was shared on Facebook by Radim Fiala, the Deputy Chair of the extreme right wing Czech political party SPD. "This is how 'Mediterranean facts' are manufactured for the Western mainstream media," says the Czech-language pro-Russian website Aeronet. The video was shared by a number of Central European hate speech websites and it has provoked a wave of hate on social networks.

Independently of each other, the authenticity of the video was checked by the AFP news agency and by the German Correctiv.org website. Both these organisations quickly found the same facts: The video is mendacious. The director and the camera person who were filming the drowning scene in Crete do not work for the media. They are film makers, who were making a film about Greek migrants escaping from the Turkish-Greek war which took place in 1919-1922:

The film director's name is Eleni Vlassi. The filmed scene took place in Turkey in 1922 when Greeks were running to escape a large fire. They tried to save themselves in the sea and many people drowned.

Eleni Vlassi wrote a long response for the Correctiv.org website. She strongly protested against the Czech video which she sees as an attempt to damage her reputation. She says that the video was made illegally and wants to take the case to court. 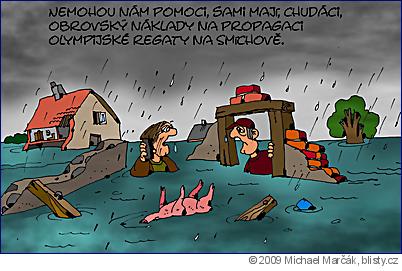