Comforting lies or unpleasant truths? The job of a historian

After 25 years, I am still hearing the same objections to my historical work and the same dismissive attitude because of who I am, i.e. a woman and a foreigner. And yet, very few people seem to know what history is really about. Here are ten of the misconceptions that dominate the Czech public sphere today concerning the history of the communist past:

1)   To try and understand what happened in the past is not the same as to morally condone it. Explanation and understanding do not result in exculpation. The communist regime was not legitimate; the people’s lives are. It is easy to dismiss the past on the assumption that “all communists were evil” but not to learn our lessons from the past means to expose the country to future dictators. For democracy to grow stronger it must learn from its past defeats. Knowledge is empowerment – which is why Czechoslovak communists were so keen on manipulating history. Don’t dismiss knowledge like a communist.

2)   Suffering is a characteristic shared by almost all European peoples in the twentieth century. All people tortured and killed, and their families, suffered hell at the individual level. The evil character of each regime that implemented such practices is already included there; no need to try and make collective figures bigger than they are. Competitive martyrdom is an unwinnable game; its victims are already dead. Communists liked to see only their own suffering and to dismiss the suffering of others. Don’t disregard others like a communist.

3)   The world is not unilaterally divided between the victims and the traitors. Every human life is nuanced and complex. Many, if not most people were victims at some level while simultaneously collaborating with the regime at another level. Moral judgement is easy only for those who were never placed in the impossible situation in which other people often found themselves in their everyday lives. A minimal empathy for individual trajectories often helps understanding their behaviour. It does not amount to condoning the communist system as a whole. Empathy, by the way, is not a dirty word. Communists used to despise empathy. Don’t judge others like a communist.

4)   History is a science, it is not just about telling a story. The professional study of history has disciplinary standards. If you do not know how to appraise and corroborate sources, a superficial reading can give you the exact opposite result compared to a contextualized reading: a document never simply “tells the truth”, especially if it is coming from secret police archives. If you don’t know how to appraise an interview, you might believe witnesses who are completely mistaken or outright lying, and are in any case telling only their story. If you don’t keep up to date with methodology, you can miss the chance to explain things in a new light. If you don’t know what historians are writing in other countries, you risk thinking your own situation is unique whereas it is not, and you fail to learn from their lessons and their progress. Communists were incredibly provincial. Don’t be condescending like a communist.

5)   History is complex and messy. We like to tell our children simple tales with a simple moral but children have to grow up one day. Life is complicated and none of us are exempt from dubious moral choices. What is true for us is true for the nation. It is not enough to read half a sentence, complacently simplified by the media, to “know” what a historian is telling and to condemn it. If you don’t make the effort to read, you will not be able to understand things in their complexity. Communists were masters at presenting situations in artificially simple, black and white terms. Don’t be simple-minded like a communist.

6)   History is not politics. Only by constantly thinking about the issues at stake and the methods you use can you keep at bay the temptation to use the past for present purposes. “Historians” who know the answer before they even ask the question are not historians but politicians. History is often contradictory, just like life, and does not provide a unilateral message immediately available to justify this or that political choice. Communists knew in advance the answer to everything. Don’t politicize everything like a communist.

7)   There is no such thing as a definitive and forever indisputable historical truth. We are always learning more about the past. What you think is the truth today is determined by your actual situation and by what you believe in. “Truth” is contingent on our social and political environment. What we think is true tells us more about who we are today than about the actual past. History is not the expression of “historical truth” but a narrative, constructed by a historian who is reflecting all along on how to make it as objective as possible. This is why it is a science. History consists of a consensus arrived at by historians, who are constantly engaging with one another about our understanding of the past. And that is why many people posing as historians are not actually doing genuine historical work. No one knew better than the communists what the alleged “historical truth” was without having to do any research. Don’t patronize like a communist.

8)   To tell over a beer what happened to you personally is not “history” but one story. First-hand experience is irreducible and is a precious source for a historian. But other people have other stories to tell, that might contradict yours yet are equally valid. Individuals are not always equipped to tell what is what – historians are. You have an opinion and an experience, not the basis for a historical monograph. Don’t dictate to historians what they should write, like a communist would have.

9)   You don’t have to have been there in person to understand what happened. None of us was sitting with Hitler in Munich in 1938 and yet we know very well what happened. None of us was living in the Middle Ages and still we have medieval historians that teach us a lot. Similarly, you don’t have to have experienced communism personally to know what it was about, nor does the profession of your parents invalidate your opinion. A direct witness has the ability and the competence to say what they saw personally but the witness standing next to them will often have a very different opinion about what they saw at the very same time. A historian’s task, again, is to sort these opinions out and to compare them with other sources, while reflecting on the way he or she does it, in order to produce a narrative – one narrative, not the “historical truth.” Don’t disqualify people for their origin like a communist.

10)     Please stop telling me that I cannot understand what happened. I have been sitting in the Czech archives for 25 years, I have spoken to dozens of witnesses, I have read hundreds of books, I can place the Czech situation in its Central European and European context and compare it with other cases, including Western countries. If you think I cannot understand the tenets of communist ideology such as terror, censorship or state lies because I am French, that shows only your ignorance of French history. If you think the Czech situation is unique, you are mistaken: much is to be learned from the Czech Republic’s neighbors, and from their historians. My job is to try to understand the entirety of this historical experience, not to produce a result that people find easy to digest or that might be politically useful.

Things were complicated. Only people as dogmatic as the communists were could claim otherwise. 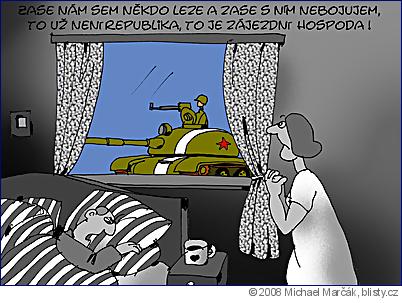