This last piece in the series of portraits of the Czech Prime Minister Andrej Babiš discusses the third component of his enigma personality dominating the Czech politics since 2013. That year saw his political movement ANO turn from a platform of “disenfranchised citizens” into the second strongest member of the then ruling coalition. The staggering story of Andrej Babiš, however, began as that of a state official in the late 1970’s and early 1980’s communist Czechoslovakia.

As was common among the fellow graduates of the Bratislava School of Economics, Babiš the university student had many of the necessary prerequisites to embark on a successful career in the state structures of the communist Czechoslovakia. He was born in 1954 to a family of career state officials with his father, Štefan Babiš, being one of the “founding fathers” of the Slovak international trade, as Babiš notes in his biographical manifesto.

While these jobs alone were hardly imaginable for someone without the Communist Party membership, in the above-mentioned self-portrait Babiš also stresses that his father was expelled from the Communist Party of Slovakia in 1965 and consequently was unable to acquire a proper job for full three years.

Babiš sr., nevertheless, secured postings in Ethiopia and Paris prior to that, and then again as the Czechoslovak GATT representative at the UN in Geneva from 1969 onwards (his party membership was restored during the reformist era known as the “Prague Spring”). Yet, throughout much of the account of his life in the communist Czechoslovakia, Babiš stresses that his father was never “a communist prominent”.

Moreover, he leaves an impression as though his family could not live to its fullest potential and talent due to the constraints imposed on people in Czechoslovakia by the communist rule. This he further illustrates with the example of his uncle Dr. Ervin Scheibner, “a famous geologist” who emigrated to Australia following the ending of “Prague Spring” with Soviet-led armies entering Czechoslovakia in August of 1968.

Precisely how these two assertions of his family being pushed around by the communist authorities and yet managing to secure interesting posts in the state institutions are compatible is a highly intriguing question. In fact, such question has become rather symptomatic of one of the fiercest fights Andrej Babiš the politician has waged in the name of his image in the Czech public domain.

That is, Czech PM’s staunch argument that he never consciously collaborated with the Czechoslovak security service, the powerful StB, despite the StB files suggesting the contrary (although in an inconclusive way). In fact, Babiš went as far as to sue the Nation's Memory Institute in Slovakia, where the surviving files StB collected on him are held, for being listed as StB agent wrongfully. The Czech PM maintains that he was unaware of StB filing up information about him, and the he never agreed to collaborate with StB.

In what is perhaps the most well-organized and researched biography of Andrej Babiš available in Czech – “Babiš, a Story of an Oligarch”, its author Tomáš Pergler writes that in the case of the degree of Babiš’s involvement with StB, a hitherto rarely discussed aspect of StB activities has entered the Czech public domain.

That is, the scope of StB operatives engaging in a domain which itself has not been documented even in their organized files. One of their chief counterintelligence activities had been the monitoring of state officials working in the foreign trade units and their interactions with traders from the West. This, however, involved numerous cases when StB agents themselves were bribed or implicated in illicit activities.

As Pergler notes, both Babiš sr. who worked at Polytechna Bratislava after his return from Geneva, and Anton Rakický, Babiš jr.‘s boss at Petrimex, were investigated for serious financial misdeeds such as embezzlement or harming the state economy. Babiš sr. was spared of further criminal investigation following the presidential amnesty of May 8, 1985 (Pergler, p. 31).

The Czech PM claims he only came in touch with StB during the official interactions when its agents were inquiring about the imports of Syrian phosphates into Czechoslovakia. Babiš states he “was shocked” upon learning that StB knows his relatives emigrated from Czechoslovakia and that he “had no idea how the other, non-economic, StB functions”.

In December 2018, The European Court of Human Rights rejected the petition by Andrej Babiš against Slovakia, and the Czech PM wowed to continue the legal battle over his collaboration with StB in Slovakia. But why is Andrej Babiš fighting so fiercely over a matter that does not appear to hinder his present-day activities in any way?

With ANO winning the parliamentary election in 2017 and Babiš securing the post of the Czech PM for himself the StB affair does not appear to cause any disapproval among his voters and supporters. As many observers pointed out, Andrej Babiš accomplished a hitherto unthinkable feast in the Czech post-communist politics – he became the first politician unharmed by his communist past.

In fact, the question looms large whether Babis being complicit with the communist authorities does not actually help him garnish voter support. Public discourses in the post-communist Czech Republic have for a long time been marked by a strong anti-communism cutting through the political spectrum (save for the Czech Communist Party), and until the surge of the populist parties generally accepted as one of the axioms describing the post 1989 developments in the country.

So strong has the clinching to the binary division of the Czech past into evil communists and good anti-communists been that a French historian researching Czech society under communism, Muriel Blaive, has been frequently attacked by fellow Czech historians and commentators for allegedly “relativizing” the crimes communist regime inflicted upon the Czech people.

There is little room for carrying out a research into Czech society under communism if one is not willing to abide by readymade thesis of Czechs being victims of a totalitarian communist state apparatus, as a Czech writer and journalist Jandourek indicates in one of the latest criticisms of Blaive's work.

The life story of the Czech PM, however, demonstrates quite well that life under communism had been more ambivalent than a childish narrative of a handful of evil communists oppressing (and oppressed they did) innocent and democratic-minded population would like to stipulate. Babiš, just like majority of the Czechoslovak population, lived in a country where the living itself necessarily involved cooperation with the regime of some sort on daily bases.

Moreover, the future Czech PM was certainly a highly ambitious man just like other members of his immediate family. Drive for the success of her sons was why Babiš’s mother Adriana “let herself be employed” at the Institute of Marxism-Leninism, according to the PM’s own words.

Babiš makes no heightened fuzz about it. He sends his supporters clear message – that of a man involved in authorized student organizations, Communist Party and eventually achieving his “dream” of being posted abroad, namely Morocco in 1985.

In doing so, Babiš gives Czechs what no other post-communist politician has thus far been able to do. He legitimized their own ambivalent feelings about their lives in the communist Czechoslovakia. Afraid about what others may say about your fine job under communism, or you being able to study fancy fields such as economics or history? It is fine – in our ANO-led Czech Republic this does not make you an evil communist.

As long as liberal and democratic-minded currents in the Czech Republic will adopt the meek, black-and-white vision of the Czech past, they will likely be losing their battles over popular support to populist parties such as ANO. Moreover, in doing so they also help pave the way to a more serious relativizing of values.

That is, heeding to the twisted logic of worshiping profits first whatever the questionable “business” practices were employed along the way. Just as the success of Babiš the owner of Agrofert is that of a ruthless entrepreneur, politics of Babiš the Prime Minister too leave an impression of a winner-takes-all mentality.

The business model Andrej Babiš personifies does not leave room for democracy other than using democracy to meet the ends of those who master it. In a strange twist of affairs, the Czech PM during his visit to the US is to find another entrepreneur at the White House to whom success seems to be the measure of all things.

One is left to wonder whether these men have more in common as objects of interests of Russian intelligence and its feared predecessor, the KGB, or as heartless entrepreneurs, or politicians, or actually all of the above combined in unprecedented ways.

Czech Prime Minister Andrej Babiš, an oligarch and the owner of Agrofert, one of the largest industrial concerns in the Czech Republic, who also controls two major Czech newspapers, is due to visit Donald Trump in the White House next week. ...

The current Czech Prime Minister’s astonishing political success was preceded by two decades of ruthless and at times, allegedly, even blood stained business practices. To bo... 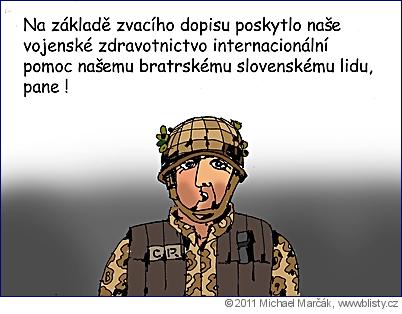